The Real Truth Behind the Economy Under Trump.  The Impact of the Republican Tax Cut …and Lies.
When Republicans delivered $1.5 trillion in tax cuts last December and slashed the corporate tax rate from 35 percent to 21 percent, they said it would come with a big wage boost for American workers. Except it hasn’t.
When the Bloomberg was published showing private data from PayScale’s wage index swept across Twitter. It shows a drop-inwages in the second quarter of 2018. While wages have risen by 12.9 percent overall since 2006, wages adjusted for inflation (so-called “real wages”) have actually fallen by 9.3 percent.
And between the first and second quarters of 2018 — after the tax cuts were enacted — real wages fell by 1.8 percent. 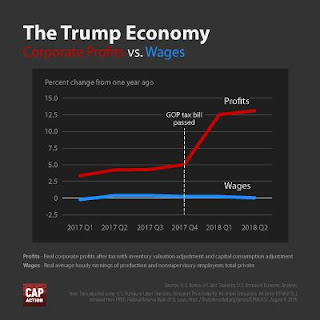