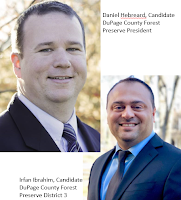 The 2018 primary had a near full ballot of Democratic candidates for the local elections in DuPage including County Board Chair, all of the District seats, Sheriff, Clerk, Judges and of course, the Forest Preserve Board.  Out of all of these candidates, only the Forest Preserve Board candidates were challenged.  Their fate would be decided by an elections panel, set up to ensure that all candidates followed and were complying with the rules to protect the public.  Why is that, do you suppose?
Amazingly, two local Republicans had filed complaints against us.  Not only did these community members file complaints, someone had hired the same expensive attorney to represent both complainants and keep the Democrats off of the ballot.  Who could that be?
For Irfan, all of the months of hard work obtaining double the signatures needed could be for naught as he was representing himself with the help of DuPage Democratic Chair Robert Peickert.  Thankfully, he would have an initial hearing and the county would verify enough signatures to throw out the complaint.  Irfan Ibrahim would stay on the ballot and continue his campaign, raising awareness about keeping “Public Lands in Public Hands”.
Daniel, with a large amount of grassroots support, also had double the petition signatures required, with over 2000.  In Daniel’s case, however, the complaint was not about faulty signatures. Instead, it was alleged that those who signed his petitions were confused by Daniel’s use of “Forest Preserve President” as the position sought, even though that was the language recommended on the election commission website. The contention was that the proper term should have been “Forest Preserve District President” and, therefore, everyone who signed the petition was confused about the position he was seeking. There is only one Forest Preserve in all of DuPage County.  Could they really all have been confused?
Apparently the Forest Preserve Board, made up of all Republicans, was not happy to be challenged – preferring that the voters have no options on the November ballot.  Daniel was lucky enough to have made a powerful friend in Jeff Jacobson, candidate for Circuit Court Judge in DuPage.  Jeff would represent him, guiding him through the challenges.  The Republicans actually planted people to sign Daniel’s petition in hopes they could challenge him.  Some came forward to sign affidavits that they were indeed confused as to what office he was seeking.  The election board was unmoved and eventually ruled in favor of Daniel.  Nobody was confused.  Would this be the end?
Of course not. Daniel had the audacity to challenge a multi-millionaire.  The case would go to Circuit Court and eventually even to Appellate Court where Daniel would again prevail with the assistance of Jeff Jacobson and the aid of the DuPage Democratic Party.  But why such a big challenge to Irfan and Dan?  Why the fear of being challenged on the ballot?
The goal of an election should be to have open debate about the issues.  Is it right that the Forest Preserve Board receives full-time salaries and benefits for their whole families for meeting an hour or two a week?  They don’t have offices, they don’t make laws, and the largest responsibility is to ensure the finances are in order.  Why do people have to park all over the streets at Waterfall Glen?  Isn’t there money to add parking and improve amenities?  The current Forest Preserve Board found nearly $17 million to improve the golf course with another $12-15 million planned for a clubhouse there.  They had the time to give away 10 acres to the Village of Winfield to assist in a business deal.  Those are the deals we know about.  What don’t we know?  These are the issues that will only be discussed when incumbents are challenged in open elections.