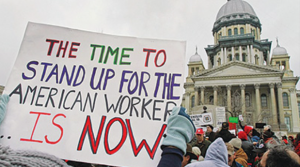 IF YOU NEED ANOTHER REASON TO VOTE ON NOVEMBER 8 …..

The Workers’ Rights Amendment to the Illinois Constitution is on the ballot!

In the fall of 2022, Illinois voters will have an opportunity to vote for a constitutional ban on “right-to-work” laws in the state. Right to Work laws weaken unions.

The Workers’ Rights Amendment would add a section to Article 1 of the Illinois Constitution that prohibits a “right-to-work” law from being passed now or in the future in Illinois and establishes workers’ rights to organize and bargain collectively over wages, hours, safety and other conditions of employment.

Over the past decade, various states have passed laws that limited the issues that union members could negotiate over, and these laws have weakened unions and lowered the standard of living for the middle class.

Countless studies have shown that workers living in free-bargaining states enjoy higher wages, better healthcare benefits, and much safer workplaces than their counterparts in “right-to-work” states. Passing this amendment will be a powerful signal of Illinois’ commitment to its workers for many years to come, no matter which political party is in power.

The Workers’ Rights Amendment would add the following section to the Illinois Constitution:

(a) Employees shall have the fundamental right to organize and to bargain collectively through representatives of their own choosing for the purpose of negotiating wages, hours, and working conditions, and to protect their economic welfare and safety at work. No law shall be passed that interferes with, negates, or diminishes the right of employees to organize and bargain collectively over their wages, hours, and other terms and conditions of employment and workplace safety, including any law or ordinance that prohibits the execution or application of agreements between employers and labor organizations that represent employees requiring membership in an organization as a condition of employment.